What Is The Model S Plaid?

With the longest range and quickest acceleration of any electric vehicle in production, Model S Plaid is the highest performing sedan ever built. Both Long Range and Plaid powertrains, with updated battery architecture, are capable of back-to-back, consistent 1/4 mile runs.

Before we delve into the numbers, let’s recap the Model S Plaid’s truly impressive specs. Essentially the first significant update in the Model S’ nine-year production run, the new 2022 version is slightly lower, longer, and lighter than before, unrecognizable inside, and significantly more powerful.

The reworked design features subtly flared fenders to accommodate wider wheels and tires. The wheels now measure 9.5 inches wide in front and 10.5 inches wide in the rear, increases of 1.0 and 1.5 inches. The car also features revised front and rear fascias, plus a reworked hood. The highest-performance Plaid also gets a new rear diffuser and a carbon-fiber spoiler. 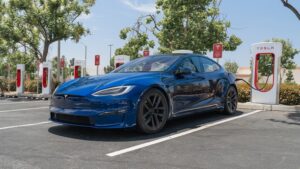 Inside, Tesla drastically reworked the interior to make it more luxurious, spacious, and entertaining—in fact, the company says the front seat rails are the only retained parts. The new dash is the biggest change. It features a landscape-oriented infotainment system similar to that of the Model 3 and the Model Y, a new digital instrument cluster, a new screen for rear passengers, hidden HVAC vents, and, of course, the controversial “yoke” steering wheel. 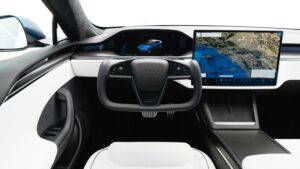 The most significant changes are hidden beneath the skin. The Model S Plaid features Tesla’s first-ever triple-motor system, producing a staggering 1,020 horsepower and 1,050 lb-ft of torque.

The Plaid’s single front and twin rear motors are essentially modified versions of those found in the Model 3/Model Y. However, in the Plaid they feature novel carbon-fiber sleeves that allow the motor rotors to spin at 20,000 rpm to achieve the car’s claimed 200-mph top speed without punching through the stator. These carbon sleeves, Tesla says, make a more complex two-speed transmission like the one seen on the Porsche Taycan unnecessary. They also give the Model S Plaid a shockingly linear powerband: Tesla says peak horsepower happens at 120 km/h and holds steady all the way to 320 km/h. 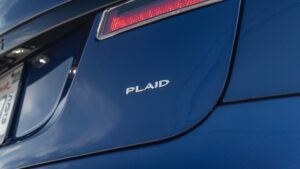 The battery pack was always the Achilles’ heel of earlier Model S performance variants, so Tesla updated it significantly to take full advantage of the tri-motor system. It’s slightly smaller than before (100 kWh on the Plaid versus about 104 kWh on the Model S Performance this car replaces), but Tesla focused its efforts on improving coolant and electrical current paths. The end goal is better thermal capacity, ensuring the Plaid can deliver sustained performance without overheating or power reduction. As an added bonus, Tesla engineers say the changes help the Model S battery pack charge quicker, too. The EPA rates the Model S Plaid on 21-inch wheels at 560 Kilometers of range. 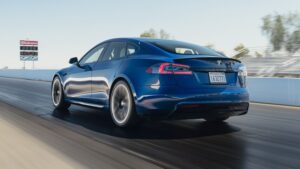 How Quick Is The Model S Plaid On A Prepped Surface?

No matter the surface, to get the quickest launch from a 2022 Tesla Model S Plaid, you must dive into the car’s infotainment system and select Drag Strip mode. Over the next eight to 15 minutes (the time needed varies), the car preconditions the powertrain for hard acceleration, heating or cooling the battery as needed and chilling the motors.

Once you’ve enabled Drag Strip mode, quickly chirp the tires on the VHT—at Famoso, it was caked on so thick it very nearly pulled our shoes off—by stabbing the throttle to clear any debris from the tires. To engage launch control, push hard on the brake, press the accelerator to the floor, and wait. Over the next nine or so seconds, the Model S’ nose drops into the Plaid’s “cheetah stance.” When the final “launch control ready” message is displayed, firmly press your noggin against the headrest (trust us), release the brake, and hang on. 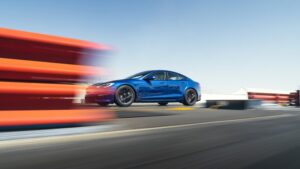 The Model S Plaid zips down the quarter mile in a staggeringly quick 9.25 seconds at 245 km/h. The run from 0 to 100 km/h happens just 1.98 seconds after the brutally hard launch. The Plaid covers distance so quickly, it’s difficult to even register what’s happening. The yoke gets light in your hands, your neck muscles strain as your helmeted head digs into the headrest, and your surroundings blur into mere shapes and colors as a quarter mile of pavement vanishes underneath you.

So, yes, this all makes the 2022 Tesla Model S Plaid the quickest production car ever made —an immense accomplishment. It’s also among the quickest vehicles on sale today, though Rimac recently claimed quicker 0-60 and quarter-mile performance for its Nevera hypercar.

The Hidden Opportunity For African Countries

The Hidden Opportunity For African Countries