It's had to go at it alone in developing a space station, in part because it has been excluded from the International Space Station project.

China has launched three astronauts into orbit to begin occupation of the country’s new space station.

The three men – Nie Haisheng, Liu Boming and Tang Hongbo – are to spend three months aboard the Tianhe module some 380km (236 miles) above the Earth.

It will be China’s longest crewed space mission to date and the first in nearly five years.

The crew successfully docked with the space station just over seven hours after the launch.

The moment of contact was met with applause from mission control in China.

Their Shenzhou-12 capsule took off atop its Long March 2F rocket on Thursday.

Lift-off from the Jiuquan satellite launch centre in the Gobi desert was at 09:22 Beijing time (01:22 GMT).

The launch and subsequent mission are another demonstration of China’s growing confidence and capability in the space domain.

In the past six months, the country has returned rock and soil samples to Earth from the surface of the Moon, and landed a six-wheeled robot on Mars – both highly complex and challenging endeavours.

What will the crew do in space? 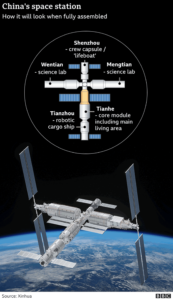 The primary objective for Commander Nie Haisheng and his team on the Shenzhou-12 mission is to bring the 22.5-tonne Tianhe module into service.

“I have a lot of expectations,” Mr Nie said ahead of the launch.

“We need to set up our new home in space and test a series of new technologies. So, the mission is tough and challenging. I believe with the three of us working closely together, doing thorough and accurate operations, we can overcome our challenges. We have the confidence to complete the mission.”

The 16.6m-long, 4.2m-wide Tianhe cylinder was launched in April.

It is the first and core component in what will eventually be a near 70-tonne orbiting outpost, comprising living quarters, science labs and even a Hubble-class telescope to view the cosmos.

The various elements will be launched in turn over the course of the next couple of years. The construction will be accompanied by regular cargo deliveries, as well as crew expeditions. 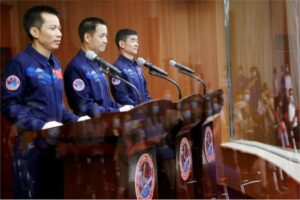 What do we know about the astronauts?

The Chinese authorities kept the identities of the Shenzhou-12 astronauts under wraps until a press conference on Wednesday.

A fighter pilot, Nie Haisheng, 56, is said to be China’s oldest astronaut in space.

He is a veteran of two previous flights, which included a 15-day visit in 2013 to the prototype space station, Tiangong-1. This has since been de-orbited.

His crewmates, Liu Boming (54) and Tang Hongbo (45), are also from an air force background. Liu’s earlier spaceflight experience was on the Shenzhou-7 mission in 2008 that saw him participate in China’s first ever spacewalk.

Mr Tang is the rookie on this occasion, having never before gone into orbit.

The food, fuel and equipment the trio will need during their stay aboard Tianhe was delivered by a robotic freighter last month.

This freighter is still attached, and the men will make unpacking its supplies their first task as soon as they’ve settled in. Included in the delivery are two spacesuits they’ll need to conduct spacewalks on the exterior of Tianhe. 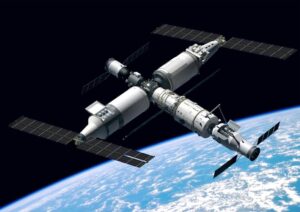 What are China’s space ambitions?

China has in recent years made no secret of its space ambitions.

It has poured significant funding into its space efforts, and in 2019 became the first country to send an un-crewed rover to the far side of the Moon.

But it’s had to go at it alone in developing a space station, in part because it has been excluded from the International Space Station project.

The US, which leads that partnership with Russia, Europe, Canada and Japan, will not co-operate with the Asian nation in orbit.