Tesla’s CEO kicked off the opening of the company’s new Giga Texas factory on Thursday. During the event, Elon Musk promised to massively scale up production in 2023, and showcased an updated Cybertruck prototype in addition to hinting at a dedicated robo-taxi.

Located just outside of Austin, Giga Texas is the latest and largest of Tesla’s gigafactories, serving double duty as the company’s new corporate headquarters. With over 10 million square feet of floor space, the facility unites all parts of Tesla’s battery and vehicle assembly under one roof. According to Musk, raw materials go into one end of the building and completed vehicles — with the automaker’s new cells and structural battery packs — come out of the other.

The bulk of Giga Texas’ output will consist of the Tesla Model Y, which Musk estimates will reach up to 500,000 units per year. Next year, the Tesla Cybertruck electric pickup is also scheduled to enter production, bringing an end to a nearly three-year wait for early pre-order holders. This lines up with Musk’s previous claim that the wedge-on-wheels would be delayed until 2023. 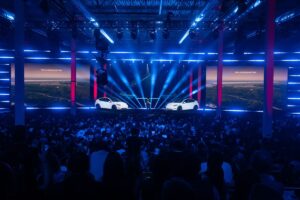 During the presentation, the first Model Y crossovers built in the Texas plant paraded across the stage before being joined by a new Cybertruck prototype that — among other small changes — didn’t have door handles. Musk said that the truck can sense your approach and “just knows that it needs to open the doors.”

Giga Texas’ contribution to Model Y and eventually Cybertruck production will be critical to a massive scaling up of production. Musk stated that Tesla sold over 1 million EVs over the last 12 months, a huge amount to be sure, but still a small chunk of the 80 million vehicles delivered globally by the rest of the automotive industry. Riding high on that news, Musk said that Tesla is poised to grow to “a truly massive scale” that “no company has ever achieved in the history of humanity” (yes, really) before teasing a wave of new products coming over the next year.

Musk also teased a dedicated robo-taxi vehicle that will look “quite futuristic,” but didn’t spill the beans on its expected timeline. We hope to hear more about that over the next few months. Musk also mentioned that the automaker’s upcoming Semi and Roadster models are also slated to enter production next year, alongside Tesla’s Full Self-Driving technology, which will reach all North American customers in 2023, presumably leaving its current closed beta state. (We’ll remind you that FSD is not, in fact, fully autonomous, rather an advanced driver-assistance system.)

The Tesla robot, now dubbed Optimus, is also still in development. Musk said near the end of the show that the bot will enter production “hopefully next year” to do “anything that humans don’t want to do.”

We’re inclined to take most of Musk’s claims with a cautionary grain of salt given the CEO’s history of hyperbolic statements and overpromising on product timelines. Still, there’s no denying the pace of Tesla’s growth and the physical scale of the new Giga Texas plant. Other Tesla facilities include its former headquarters and plant in Fremont, California, Gigafactories 1 and 2 in Nevada and New York (respectively) and Gigafactory Shanghai. Most recently, Gigafactory Berlin-Brandenburg opened earlier this year.