Apple’s October Mac event has delivered the powerful new MacBook many have been waiting for. The 2021 version of the MacBook Pro 16-inch was announced Monday during the company’s livestreamed Unleashed event (alongside a 14-inch model), hot on the heels of September’s iPhone launch. The new MacBook Pro starts at $2,499

Key among the new additions to the company’s bigger laptop are updated versions of Apple’s homegrown M1 processor. We’ve already seen Apple’s silicon added to smaller MacBooks and iPads, but the 16-inch MacBook is getting a more powerful version that should meet the needs of people who require high-performance machines — in particular those who do intensive photo and video editing. 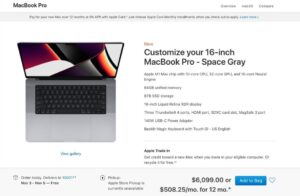 Now the company is equipping its most advanced laptop with the newly announced M1 Pro and M1 Max processors. The addition of the M1 Max will give a 4x graphics performance boost to the 16-inch MacBook Pro over its predecessor, and the M1 Pro will be 2.5x better than the previous generation, according to Apple. Both chips provide a 2x CPU boost over the 2019 MacBook Pro.

The new silicon will also reportedly make the MacBook more power-efficient, providing more battery life on a single charge. Apple rarely discloses detailed battery specs, but it promises the battery can last twice as long in Lightroom and four times as long in Xcode, as well as allowing for 21 hours of video playback.

“The performance of the M1 chip in MacBook products released to date is a major endorsement of Apple’s investment in custom silicon,” said Ben Wood, chief analyst at CCS Insight, in a statement. “The M1 Pro and the M1 Max chips take this to new levels with further improvements in performance and battery life.”

Taiwan's Foxconn Suprises Everyone With Reveal Of Three Electric Vehicles