Taking a swipe at Boston Dymanamics‘ Atlas and Spot robots who have previously been seen dancing, choreographically fantastic shows. Everyone loves them including the Tesla CEO Elon Musk who unveiled their Tesla Robot.

A costumed dancer fitted in the white and black costume started off walking on stage like a robot before breaking into dance moves much to the delight of Elon Musk and was also met by huge laughs and cheers from the crowd who appreciated the joke.

Elon Musk speaking during the Tesla AI Day promised that Tesla should have a humanoid robot protoype ready by this time next year. 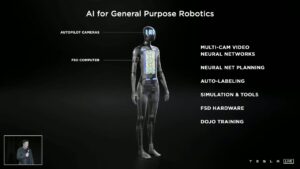 This goes into their portfolio that already includes Neuralink, Space X, Starlink, The Boring Company, Solar Roof that makes use of their existing battery development technology that couples with a Tesla Power Wall that powers your house as well as charges your Tesla car of course.

The Tesla CEO who has had resrevations about A.I jokingly told the crowd that if you can run more than 5 Mph you’ll be fine. Stating that the robot will be designed to perform the boring repetitive jobs that humans would otherwise be doing. The robots will be friendly. He went on to say that human labour is essential and substituting those repetitive or maybe even risky tasks with AI assisted robots, makes alot of sense. 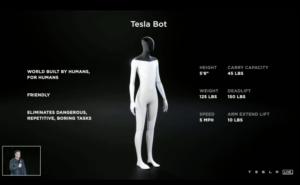 It only makes even more sense if you realise that Tesla’s Full Self Driving (FSD) technology involves mapping out the entire United States highways, but not only did the system map roads, it has created an accurate 3D world that can be populated for details in the environment that will enable the robot to manouvre in a video game like world that is accurate and real time to what the robot sees.

The possible uses for such robots can be for assisting disabled people or the elderly or maybe to just get you groceries or wash your Model S or maybe even what I’m sure will be tested on YouTube, Tesla Bot (aka Optimus Prime) driving a Tesla on a drag strip. Can’t wait!